I’m playing guitar in a fusion-leaning three piece band. We have been searching for a keyboard player for some time, with no luck. Several guys have auditioned with varying results. The first guy was so good that he hijacked our entire sound with great sounding jazz standards, so we sounded like every other jazz cover band in town. The next guy played pop and no jazz. The next guy had a PhD in music and wasn’t too interested in what we were doing. The next guy was deaf from working in steel mills, but was otherwise a good jazz keyboardist. We could never tell if his off-key, offbeat playing was due to deafness or genius. The next kid said that he was still learning his minor chords. You can see where this is going.

I have a friend who plays clubs with one other guitarist. My friend uses a Yamaha nylon string boxless guitar with a hex pickup, played into a Roland guitar synth. He plays bass on the lower two strings and other instruments on the upper four, and hits drum triggers with his feet. The two of them sound like a full band, but only split the take two ways.

So a guitar synth sounded like a possibility for our wanna be four piece. I looked at the Roland units, but all the reviews I read said that the AXON AX100 had much faster tracking. Some searching revealed that the AX100 is either a dead product or on the way out fast. I only found a few in the US, so I pounced.

The AX100 is really a fine piece of work. It tracks pretty well, though it is a bit sensitive to how you pick the string. But I can get used to that. In the band setting, it increased our palette of sounds dramatically, and the other two guys are no longer pining for a keyboard player. So far, so good.

However, I noticed that about two times every practice the AX100 would get stuck on a note and require a power cycle to reset. I found this highly annoying, especially when it happened in the middle of a song. It’s not like I have other guitars and keys playing along, covering me while I reboot my rack. Sheesh!

The corporate people at AXON were no help (of course), and though others on the AXON forum had seen the problem, no one had a solution. So I created one of my own.

It turns out that the AX100 uses a standard wavetable synth card. The header pinout for this card has been published. It appears here.

Pin 26 on the header is RESET, active low. This line resets the synth card without resetting the AXON hardware. It is driven from the AXON processor. My task was to yank on this line when the synth got hung up. (Actually, it’s probably the AXON processor/firmware neglecting to send a MIDI note off command.)

I control the AXON and other processors in my rack with a wireless controller I built. This system has a keypad mounted on my Strat, and a wireless foot controller. These devices operate at radio frequencies, sending data bursts to a receiver in the rack. The rack receiver converts the RF commands to MIDI commands and thus controls the other boxes in the rack. So I have some custom hardware that I can modify and program to drive the RESET line on the synth card, and I chose to send the control into the AXON box on a spare MIDI connector pin.

But to pull this off, I had to ensure that the original and new reset sources were both able to control the synth card. Instead of hacking up the main AXON PCB, I chose to break the connection in the header on which the synth card is mounted.

Here is a picture of the synth card mounted in the AX100. (Click pictures to enlarge.) 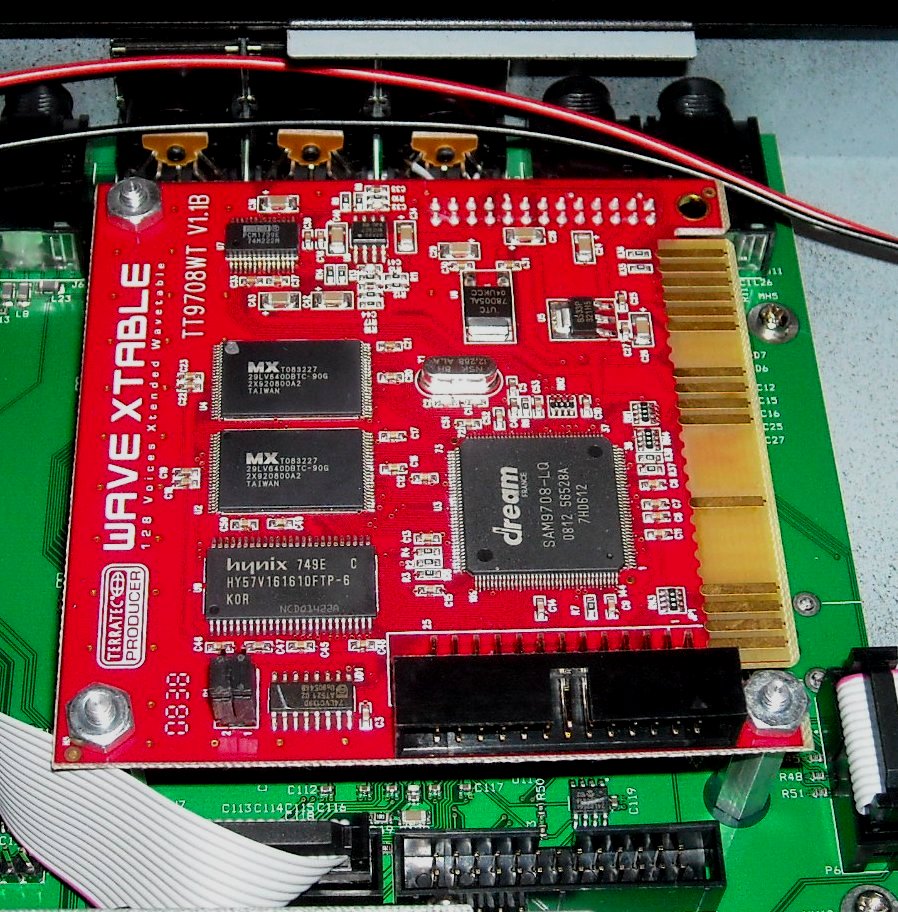 The card is mounted from the factory using a standard 0.1″ dual row header. I made a header extender that allowed me to break the RESET signal and logically OR in my external reset from the wireless receiver. The following picture shows the header mounted in place, with the few parts I used wired to the MIDI IN connector on the AX100. I had to use taller standoff posts to compensate for the taller connector, and those are the hexagonal aluminum units. 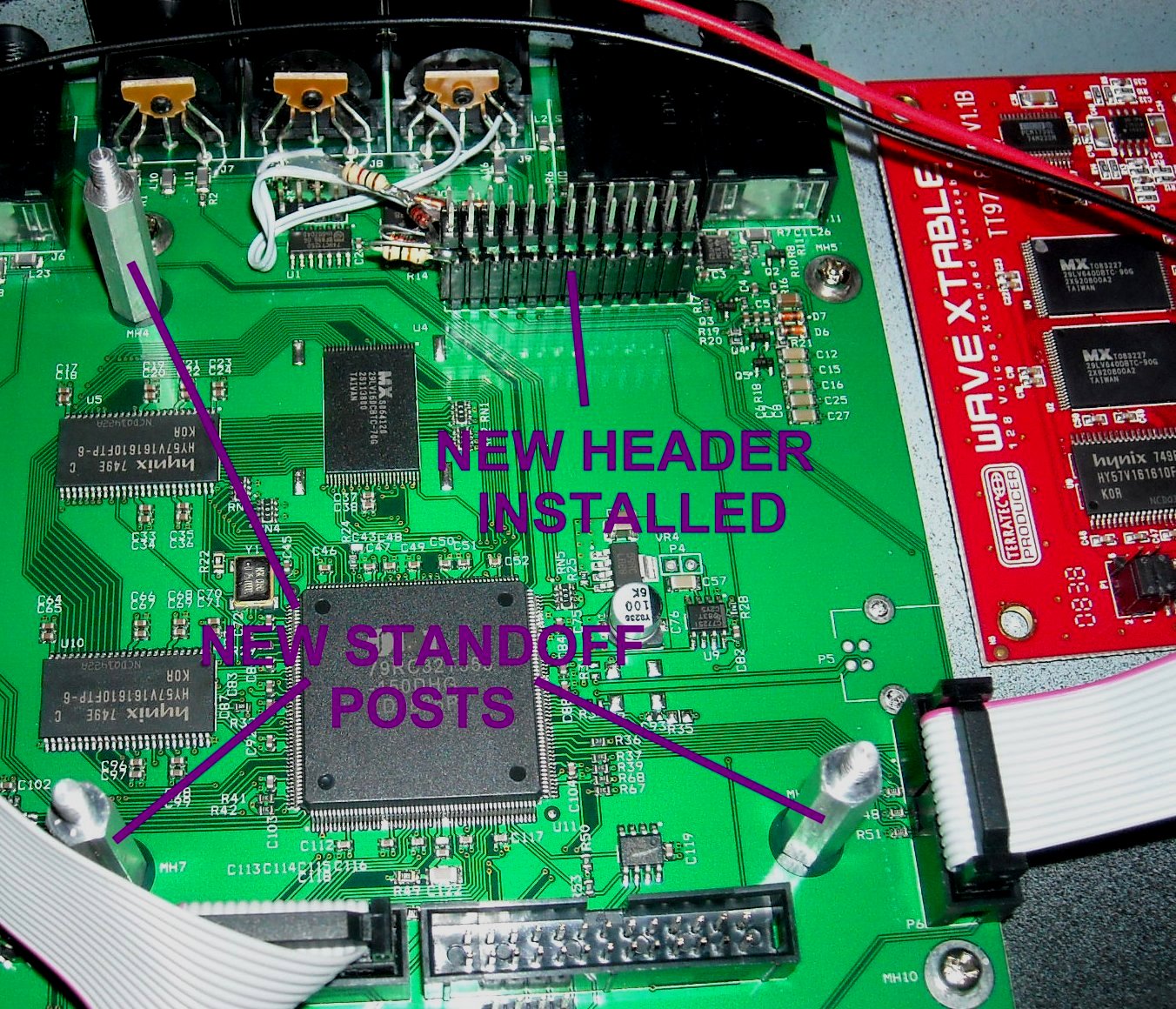 Here’s a view of the header. You can see that pin 26 has been broken and the reset components inserted. Pin 25 is ground. The other parts are soldered onto the header, requiring no modification to the AX100 or synth PCBs. I stabilized the parts with some glue. 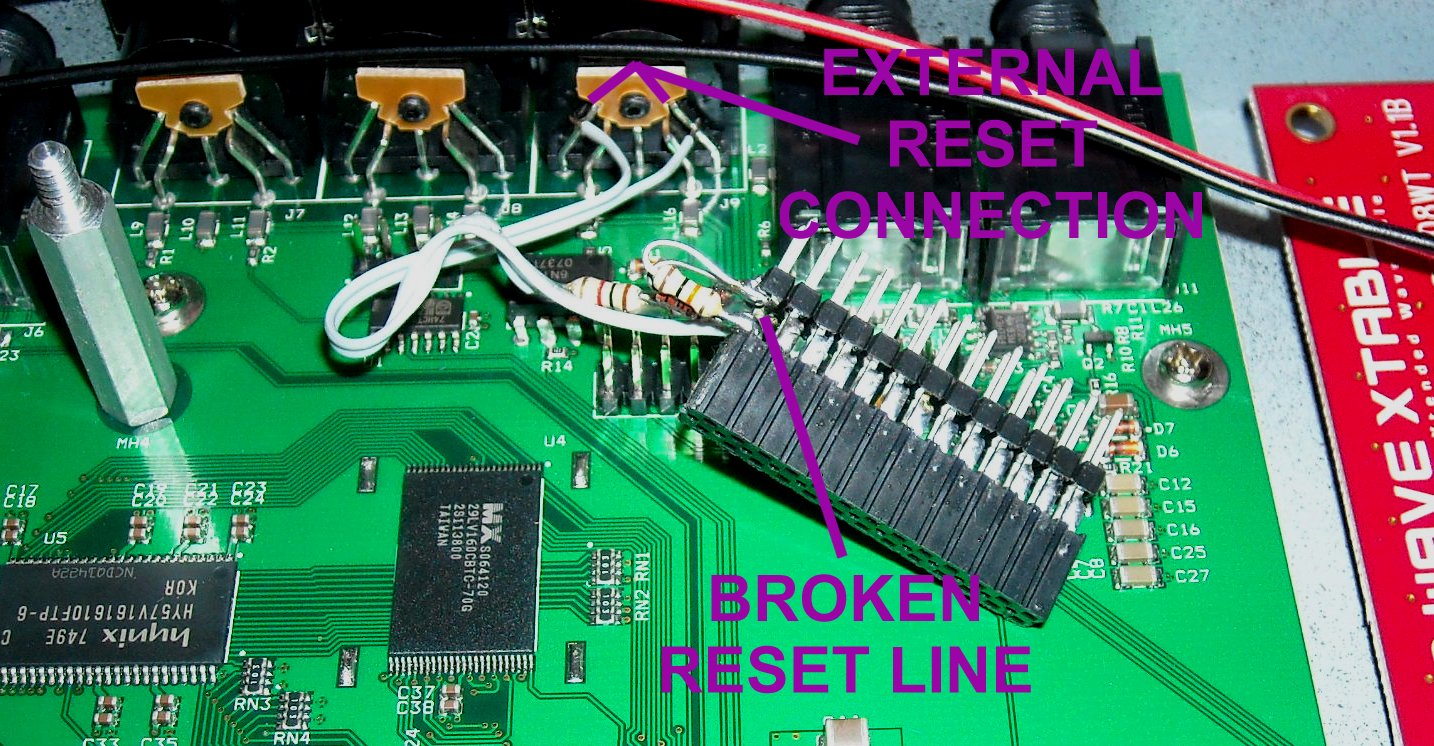 This is the schematic of the modification. The transistor is at the other end of the MIDI cable in the wireless receiver and is a typical switching type, 2N4401.

I have the wireless receiver programmed to assert the RESET line low for about 100ms when changing synth patches. Thus, every time I hit a patch button on my wireless devices, the synth is reset before sending out the program change commands. The synth actually resets pretty quickly and the delay is not noticeable.

What is the moral of this story? Even though you spend hundreds or thousands of dollars on gear, and even though the manufacturer creates amazing patented technology (as AXON did), sometimes they only do a 90% job testing the result. (Can you say “Microsoft”?) You end up with a really cool product that has small problems making it unusable in real life situations. It’s that last 10% of product development that is the tough part, making the product usable to the customer. Managers usually truncate product testing in order to redeem themselves from busted development schedules, and it shows.