“Ed can even hear the difference between a guitar plugged into a 5-foot cable and a 10-foot cable.” — Guitar tech Matt Bruck speaking of Ed Van Halen in USA Today, January 6, 2009. Ed can hear tonal the difference caused by cable capacitance. Can you?

Every cable has an impact on the tone of your guitar. Why? When you place two conductors near each other, there is an effect between them that physicists term capacitance. It is basically the capability of the two conductors to hold an electric charge. You see capacitance in real life. Scuff your feet on the floor and touch a doorknob. ZAP! The electric charge rushes from your body to (or perhaps from) the metal doorknob. The amount of charge your body stores is related to your mass and shape and composition: your capacitance. (It will take your beer buddies a while to understand your jokes about their increasing capacitance.)

Two wires in a guitar cable also can store electric charge, though not as much as a fully fed couch potato. However, even a small amount of capacitance affects your guitar’s tone. It works like this.

With static, unchanging charges (your guitar cable connected to a battery, for example), no electric current moves through the capacitor. After all the two conductors are insulated from one another. But when the charge starts changing, like when you play music through the guitar cable, a small current flows between the conductors. Now this current gets bigger with increasing frequency, so the highs are affected more by the capacitance than the lows, and you have probably heard this yourself. In fact, the typical treble control in your amp is simply dialing in larger or smaller capacitances across the signal, controlling the high frequency rolloff.

What about the guitar cable? The longer the cable, the higher the capacitance and the more high end rolloff you would expect.

Capacitance is measured in units of farads, after Michael Faraday, a physicist from England who lived in the 1800’s. The farad is a huge unit, so we typically find capacitances only a fraction that large. We’ll use the unit picofarad, which is a million-millionth of a farad.

Good audio cables, not just guitar cables, measure out at about 30 picofarads (or 30pf) per foot. The best low capacitance cables are about 15pf/foot. We’ll use 30pf/foot as a representative number. It’s surprising that even cheap cables have this capacitance, within a few picofarads, regardless what the advertisements say!

The situation is actually a bit more complicated. That’s because the pickups in guitars are coils of wire, called inductors by electrical engineers. It turns out that inductors are the opposite of capacitors in a sense. For example, replace a capacitor with an inductor in your treble control and you will find that it now affects the bass. Kind of an evil twin relationship.

When you have capacitors and inductors in the same circuit, things get even more interesting because the combination creates a tuned circuit. Think wah-wah pedal. As you move the pedal, there’s an audible peak in the response that boosts one band of frequencies over all others. Such pedals actually have inductor/capacitor circuits to make this effect.

A similar thing happens when you connect your guitar, with inductive pickups, to your capacitive cable. A tuned circuit is created. This changes the frequency response of your rig in unexpected ways.

We concluded above that increasing cable capacitance rolls off the high frequencies. This is true overall, but it does something else in concert with the pickup inductance.

The graph shows the frequency response of a guitar in three situations: 1) no cable at all (green), 2) 16 foot cable with 480pf capacitance (blue), and 3) 35 foot same cable with 1040pf capacitance (purple). (I measured this with my 1990 Stratocaster, middle pickup.)

You can see this explicitly for many pickups in our Guitar Pickup Tone Database.

So we see that adding capacitance does not only reduce the highs, it adds a midrange gain increase. How interesting. Could it be that the guitar gods, in using whatever cheap cables happened to be laying around the studio, inadvertently caused some midrange boost that they were not expecting? If you want to get that sound, then you need to use that cable, which of course is undocumented and a total mystery at this late date! 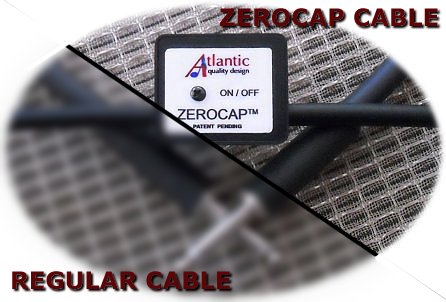 What if you want a blurry (so to speak) guitar sound? Use the tone control on the instrument to get that sound. It does, after all, simply add capacitance with the turn of a knob! There is no sense wasting signal in the cable.

Now for the “But”

There is one thing I should mention. If your guitar or bass has active electronics, then the capacitance of your cable (large or small) has practically zero effect on your sound. This is because the active electronics contain an amplifier that converts the high impedance of the pickups to a low impedance, and this low impedance can drive capacitive cables without any high frequency signal loss.

Also, since most all stomp boxes and effects have low impedance outputs, the cables you use to connect them together and to your amp also do not necessarily have to be low capacitance. However, if you use true bypass pedals, then when all the pedals are bypassed the capacitance of all the cables in your rig will add together and affect your tone.

The most important place for a low capacitance cable is between your guitar and amp or first stomp box. Try our ZEROCAP cable. You’ll be shocked at the tone enhancement. We have customers who also use ZEROCAP cables from pedal board to amp and this helps preserve tone when all the pedals are bypassed.

Also, you can compare popular cables to the ZEROCAP in our TONE SHOOTOUT!