I purchased a Fender Stratocaster some years back, a HSS LT model (humbucker with two single coils, locking tremolo). The guitar plays great and looks good, but the sound of the pickups is horrible. Compared to my other Strat with regular single coil pickups, it is a lifeless lump of dough. Blaahhhh!

After doing some investigation, I determined that it was the SCN (samarium cobalt noiseless) pickups, a Bill Lawrence design. These pickups are stacked humbuckers, basically two coils mounted vertically rather than the typical side by side humbucker configuration. This provides noise free operation in a single coil form factor. The one downside is that the tone of these pickups is awful! The tone has none of the single coil zing and none of the humbucker guts and growl. I don’t know if that was the intent, but that is the result.

After we designed the electronic measurement equipment to create the Guitar Pickup Tone Database, I scanned the SCN pickups, and sure enough, they have remarkably depleted high end. I had the ears and graphs telling me that these pickups are terrible, but what to do about it?

Purchasing another $300 worth of pickups is not a good option, for obvious reasons. Though our pickup database contains now hundreds of pickups, many of which would make good candidates, I already have a thousand bucks in this instrument.

Looking at the data on the pickups, it was apparent that they have more wire than the standard single coils. The SCNs measured at about 10.6K while the single coils on my standard Strat measured about 6.5K. That’s about 40% too much wire, inductance and resistance, which kills the high end. Why not just remove some wire from the existing pickups?

That’s just what I did, and the guitar now sounds pretty cool, though not just like a real Strat with real single coil pickups. Let me show you how I proceeded.

DISCLAIMER: I’m not suggesting you follow this procedure. Do so at your own risk. I will not be responsible for damage you do to your instrument.

The first thing I did was remove the pickguard and the two SCN pickups. This is easy to do with a screwdriver and soldering iron. I took some photos of the wiring so I’d know how to reconnect everything.

The covers of the pickups were removed gently. See the photo of the exposed pickup. I was very careful not to touch the coils as the wire is extremely fragile and will break easily.

I then removed the solid connector wire shown here: 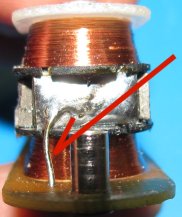 It can be desoldered from the main circuit board and bent up and out of the way. (YES, the Fender SCN pickups contain a CIRCUIT BOARD!) I did not heat the solder on the small circuit board on the end of the pickup with the connecting wire. See the picture. 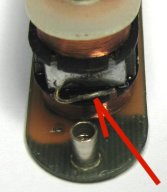 On the other end of the pickup is another small circuit board that receives an end wire from each coil. The next two pictures show those wires. 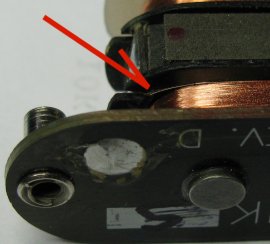 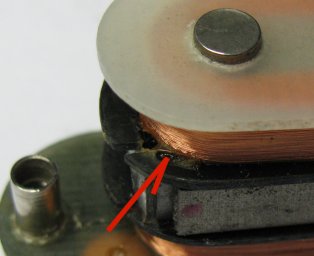 I cut those wires with an xacto knife so they could be unwound. It only takes a little flick of the knife to free the wires.

I then mounted the pickup onto a piece of steel in a vise (using the magnetism of the pole pieces) and proceeded to partially unwind the coils. 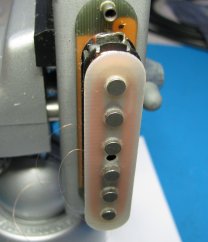 One thing that is not shown is that the threaded inserts in the circuit board pop out easily, and can be replaced easily after dewinding. Also not shown is a rubber band that I stretched around the middle of the pickup to give a smooth edge for unwinding the wire. The wafers around the inner magnets have little notches that catch the wire as it is being unwound. Tape was also effective in covering these notches.

I used a 6.3K target for pickup resitance, which makes for 3.15K per coil. It’s possible to unwind both coils at the same time, stopping periodically to check the resistance of the remaining coil wire.

There is some wax used in manufacture of the pickups. This wax can cause the wire to break when dewinding. I used a heat gun to apply gentle heat to the pickup to free the wire from the wax.

After reaching the target resistance, I soldered the loose wires back to the end-cap circuit board, and restored the bare wire connection that I had bent out of the way. Popping in the threaded inserts and replacing the plastic pickup cover completed the job.

I did a similar dewind on the humbucker because it was then way too loud when compared to the SCN’s. I dewound each coil 40% (in terms of resistance). Dewinding a humbucker is pretty straightforward, so I have not included pictures here.

Here is a plot of the old humbucker response.

Here is a plot of the new humbucker response. I’ve gained about 500Hz in high end response from dewinding the pickup, but the gain has dropped about 7dB.

Here is a plot of the old SCN response.

Here is a plot of the new SCN response. I’ve gained about 850Hz in high end response from dewinding the pickup, but the gain has dropped about 5dB.

The guitar sounds MUCH better, though it still does not sound like a stock Stratocaster with single coil pickups. The middle pickup especially has a cool vibe that is a mix between single coil twang and humbucker warmth. The humbucker is a bit brighter, but not too much, and it is still quite powerful enough for lead work. The 2 and 4 selector switch settings have a Strat-ish sound, but not exactly. However they are quite usable. It appears I have a good tone variant to add to my arsenal. The guitar is now playable and I’m looking forward to trying it out on several amps in a band setting.