Just a few years into playing guitar, and simultaneously learning about electronics, I was experimenting with all sorts of ways to get different sounds from my electric guitar. I had a tiny transistorized practice amp that had a great fuzz sound when cranked all the way up. Probably less than a watt. But I knew that a capacitor in series with a signal would likely cut the low end and leave only highs, so I started soldering. (The word “hacking” had not been invented.)

I soldered a few different small capacitors in series with my signal using a spare phone plug and jack, and it was apparent that there were some interesting sounds to be had. Tearing apart old televisions was a source of parts for my ham radio and audio addictions, so I had a box full of 365 picofarad variable capacitors, commonly used in AM radios, like this one: 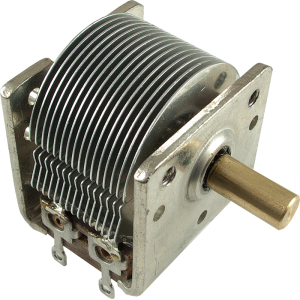 Soldered into my test lash-up, I had a variable frequency low-cut filter. Did it scream! Without all the low end overdriving that lame little pair of transistors, the high end could get in there and sizzle. And it was totally variable, at the turn of a knob! Mom hated it, so it must have been good.

Try it! If you know how to solder and have some junk jacks laying around, order one of those capacitors and see how it sounds with your Marshall stack. (We don’t pay for burned up speakers, amps, or houses.)