On my quest for interesting guitar sounds, I found that I liked brighter, shimmering tones at times, and more muted tones for softer passages. Experimenting with picks was fun. I tried all sorts of materials from brass to aluminum, to steel, various plastics… basically anything I could cut into the shape of a pick. Laminating several sheets of material together makes some interesting sounds as well.

What I settled on was a variation on the basic pick most of us use. I took a pair of diagonal cutters and cut the first 1/32 inch (about a millimeter) off the sharp point of the pick, making a flat edge.

The effect on the guitar sound is dramatic. While it still sounds like a plastic pick, the high end is accentuated, and it works really well to get a guitar lead cutting through the mix, and being heard over that guy in the back of the band banging on all those brass platters (that’s the drummer, I’m told).

To get a more mellow sound, I just turn the pick around in my fingers and play with one of the blunt edges. That works better for rhythm work, or bluesy low volume passages.

So take a set of cutters, or even nail clippers, and clip the tip of your pick and slip in a hip trip. It’s like having two guitars in your hands. 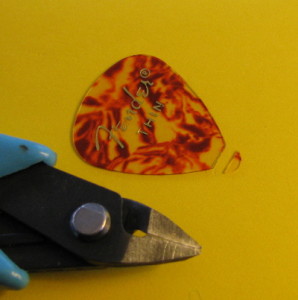 2 Responses to “Fix that Boring Pick!”